T-2: (Noon) Time to set up my post for the progress report. You've all been down this particular road with me before, so know how it all works out. I'll combine all my updates for Dewey's 24 hour readathon into this one post, in order not to spam you all too much during the day. Are you reading along? Let me know, so I can come cheer you on!

I've done my shopping and spent some time in the garden (it's absolutely gorgeous weather... totally wrong for the readathon, of course, but I enjoyed getting some sun AND being active at the same time, and once this post is up, I'll go get dinner sorted. Long live the crockpot! The others should arrive in about an hour.

I'll be back at Hour 0 with the opening meme. 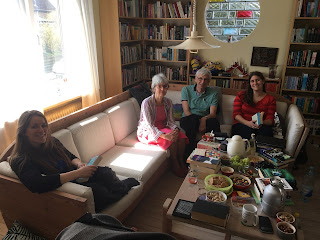 Hour 1 (almost): We're all here and ready to start - with twenty minutes to go! So what better time to do the Opening Meme :-D

1) What fine part of the world are you reading from today?
Lyngby, Denmark. My library, as per usual :-D

2) Which book in your stack are you most looking forward to?
Rebekka: "The Witness" by Nora Roberts.
Mum: "The Obsession" - also by Nora Roberts
Dad: "My Folks Don't Want Me To Talk About Slavery" collected by Belinda Hurmence
Maria: All of them? Probably "Moskitoland" by David Arnold

4) Tell us a little something about yourself!
As always we're doing the readathon as a family. This is our 8th time reading together. Dad's joining us this time for the first time ever, which is awesome! But unfortunately Mixi couldn't make it :( Next time, sweetie!

5) If you participated in the last read-a-thon, what’s one thing you’ll do different today? If this is your first read-a-thon, what are you most looking forward to?
Rebekka: I will try to eat less snacks, but I will fail miserably.
Mum: I'm gonna use a bookmark this time!
Maria: Nothing new... this is my.... fourteenth time or so? (Forgot to count) I've pretty much gotten it sorted by now.
Dad: Finding out if this is also my last readathon, or if it's a new tradition for me too.

6) Which book are you going to start out with?
Rebekka: The Witness.
Mum: The Obsession
Dad: "As You Like It" by Shakespeare.
Maria: Haven't quite decided yet - either "Changing Gears" or "The Lightning-Struck Heart" - I want to start out with a reread... but I NEVER make up my mind until right before.


Hour 2 (3pm): The first hour has passed, and we're all happily reading (and snacking! Always snacking. Rebekka's cookies are goooooood!!!!) I decided to start with "Changing Gears" and am about 74 pages into it. It's just as good as last time I read it, but at this pace will take a few hours to finish.


Hour 3 (4pm): None of us have finished a book yet, but dad switched to "My Folks..." earlier this hour... after reading the first two acts of "As You Like It" he needed a change (I don't blame him - Shakespeare is HEAVY!)

PEN PAL MINI CHALLANGE
The mini-challenge is hosted at Just One More Thing where Tami wants to know:
"I am a big fan of old fashioned letter writing and I love having pen pals. There's nothing like a hand-written letter for really getting to know someone. So, my question for you is - what fictional character would you like to have as a pen pal, and why?"

Rebekka: Hermione Granger... I don't believe neither Harry nor Ron would ever actually sit down and write!
Mum: Laura Ingalls Wilder - wait! She isn't fictional.... Hmmm... Elizabeth Bennet then :) (we saw "Pride and Prejudice" on stage yesterday and it was AWESOME!)
Dad: Does Aslan count?
Maria: Anne Shirley. I know from "Anne of Windy Willows" that she's an excellent letter-writer.


Hour 4: Another hour gone, and another 70 pages read. At this rate I should (just) finish by dinner time. I love travelogues! It's great fun to live vicariously through others, and this one is one of my favourites as it's a happiness project and a travelogue rolled up into on book :) Definitely a good plan to start with a reread.


Hour 5 (6pm): I almost forgot to stop to update - I was so engrossed in my book! I have another 30 pages to go, so can start thinking about what I want my next book to be. Dad's returned to "As You Like It" and is quietly chuckling to himself from time to time. Apparently they could write jokes in the 16th Century as well - who knew! ;-) :-P


Hour 7 (8pm): We took a break for dinner since I updated last, but are back at reading now. I finished "Changing Gears" with about 15 minutes to spare before dinner, and decided to pick up the first "Animorphs" book for something completely different. I know they're childrens books, but I've always been fond of them as they were introduced to me by my hostbrother waaaaay back when, so they'll always remind me of him and of New Zealand. I'd forgotten how entertaining they are in their own right though. May end up continuing with more of those after this one. They are REALLY quick reads - I'm already 2/3 through.


Hour 8 (9pm): I've finished book two! But considering it was a 184p childrens book, that's not all that impressive ;-) Still counts though! I really liked it, and am definitely considering picking up more of that series. For now, I turned to a Danish book though - one I bought with Isabella in mind, but which I haven't read yet myself. It's a YA fantasy trilogy and seems quite good so far. I'm only 70 pages into the first one though, so possibly a bit too early to tell. It's very easily read though - but I've read other books by the same author, and expected nothing less.


Hour 9 (10pm): I literally just finished book 3 - but again, it was a short YA, so I pretty much expected to finish it fairly quickly assuming it could keep my interest. Fortunately it could, and while I don't think I'll go straight on to the next book in the series, I may pick it up later in the readathon. It's definitely worth reading though, and I'll have to renew my recommendation to Isabella :-)

Now I just have to figure out what to read next!


Hour 10 (11pm): I decided to pick up "The Loose Ends List" by Carrie Firestone which I borrowed off Mixi specifically for the readathon. I'm 70 pages into it and really liking it so far. It's YA but has potential to be fluff with a substance. Always a good combination for the readathon. Mum and Dad left about half an hour ago, but Rebekka and I are still going strong :-)


Hour 11 (midnight): Rebekka left not too long ago, and I'm probably going to call it a night soon too. I'm either getting old or I just value my sleep more than I used to :-P But 3.5 books isn't too shabby for the first half of the readathon :-D Even if most of the second half will be spent sleeping. 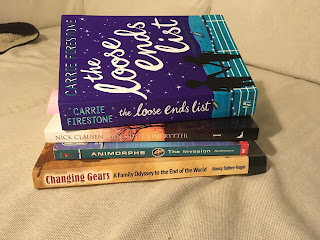 Hour 21 (10am): I've been up and reading since 8am but couldn't put my book down long enough to update. I've just finished "The Loose Ends List", and oh my goodness, it was amazing! Best YA I've read in several years - even if I did sob my way through the last 100 pages. Fluff with a substance indeed. Beautiful, heartbreaking, poignant and life-affirming all rolled up into one. It's going to be VERY hard to find a book that won't suffer from being read next. I may have to return to an old favourite (and a completely different genre) to give it even a fighting chance.

Wow. I had NOT expected that, when I first picked it up. Thanks for letting me borrow it, Mixi!


Hour 22 (11am): After a few false starts I've finally settled on "Death and the Penguin" by Andrey Kurkov. Not an old favourite - in fact, I've never read it before - but a short book that sounded just quirky enough to work. And certainly completely different from my last book. I'm only 30 pages into it so far, so way too early to say what I think of it, but I haven't been tempted to put it down at least.


Hour 23 (noon): Managed to read another 90 pages this past hour so should finish before my next update. That'll leave me with less than an hour for the final book though, so I'll have to either plan carefully or just accept that I won't finish the last one. I still can't quite make up my mind what I think of "Death and the Penguin". It's very slow-moving, but in no way boring. I own the sequel as well, but whether or not I'll bother with that one will depend a lot on what happens in the last 100 pages. Still, it's holding my interest.


Hour 24 (1:20pm): I suddenly realized I hadn't had anything to eat all morning, so got sidetracked getting that sorted, meaning I've only just finished "Death and the Penguin". With so little time left, I think I'll just call it a wrap and not start another book. It was a weird book, but part of that I think is due to cultural differences (the author's Ukranian). Still haven't decided whether or not I want to read the next one, but definitely not just now.

So that's it for this time around! With 5 books and 1380 pages read, I think that might be a personal record. And as always it was great to have company for so much of yesterday. It really is an awesome family tradition we've managed to establish :-D